What awaits fans at Qatar World Cup: FAQs on drinks and other restrictions

With the tournament one year away, key questions for supporters planning to travel to the finals are addressed.

With the tournament one year away, a British media – The Guardian, addressed key questions for supporters planning to travel to the finals.

When will tickets go on sale?

Early in the new year, prices are yet to be revealed. But, a Qatar 2022 spokesperson told the Guardian that tickets would be “affordable for all the family” and in line with recent World Cups. For those with money to burn, executive packages are already available. These start at $950 (£707) per person for a “match club” package, which includes a group stage ticket, “street food” dining, a gift and drinks – while the more extravagant “Pearl Lounge” experience, with fine dining, and more” starts at $4,950 a head.

Can fans buy alcohol in the stadium?

A decision is yet to be made, although the expectation is that it is more likely than not. In Qatar, the sale of alcohol is restricted to a few luxury hotels and is expensive at £10-£15 for beer or wine. However, for the World Cup, it will be easier to purchase and more affordable.

In Qatar 2022 website, the question about serving alcohol during the event was adressed, as follows:

Will alcohol be available at the FIFA World Cup Qatar 2022™?

Alcohol is not part of Qatari culture, and may not be available everywhere, but it will be available in designated areas. FIFA will work with Q22, as it does with all FIFA World Cup™ host nations, to find a solution that satisfies everyone concerned.

How strict are authorities likely to be with boozy fans?

Under Qatari law it is an offence to be drunk in public. The hope from organisers is that fans will understand that they are in a conservative country and moderate their behaviour. “This is ultimately a conservative but hospitable country,” says one insider. “ So, there has to be an understanding on both sides that people should come and have a good time, while also respecting the culture.”

How prepared are the Qataris for trouble?

With eight stadiums within a 50-mile radius and most fans staying in Doha, there is clearly the potential for trouble. However, organisers insist they are rigorously prepared for all eventualities, having attended numerous major tournaments since 2011 to learn how supporters behave at major events. They have also had a partnership with Interpol called Project Stadia since 2012, which they believe will equip them to handle any trouble. “Everything has been done to make sure that it’s a safe experience for fans,” insists one insider.

Where will fans stay?

Organisers expect more than a million visitors during the 28-day event, but with only 30,000 hotel rooms in the country they are having to rely on other forms of accommodation. Under a deal with Accor, the French company will provide staff to manage and operate more than 60,000 rooms in apartments and villas across Qatar. The idea is that fans will get what organisers call “quality accommodation at a fair price” – while Qatar will not be lumbered with thousands of hotel rooms they don’t need after the World Cup.

Will it be possible to stay on a cruise ship?

Yes. Organisers have hired two huge ships, with swimming pools and spas, which offer a combined capacity of 4,000 cabins. Plans to allow fans to stay in luxury tents in the desert are also being worked on.

Will rainbow flags be allowed in stadiums? 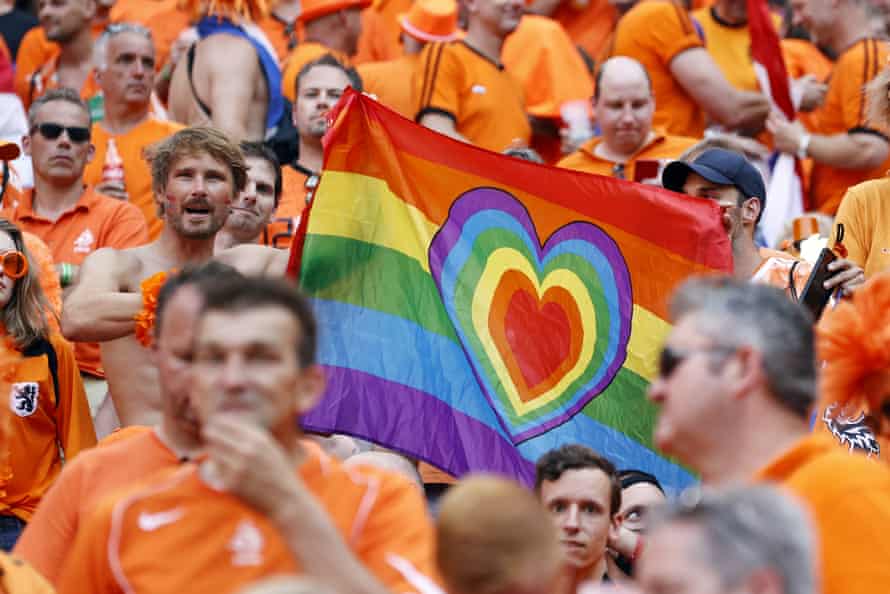 Netherlands fans hold the rainbow flag during Euro 2020. Will the flag be on show in Qatar?

Yes. Qatar has said it will comply with FIFA rules promoting tolerance and inclusion at matches, despite its strict anti-LGBTQ+ laws. As FIFA’s chief social responsibility and education officer, Joyce Cook, puts it: “We will see a progressive change in all of those aspects, and rainbow flags, T-shirts will all be welcome in the stadium – that’s a given. They understand very well that is our stance.”

What about gay supporters?

Homosexuality is illegal in Qatar, with a 2004 law stipulating imprisonment between one and three years for sodomy between men. However, the Qataris have repeatedly insisted that everyone will be welcome, regardless of nationality, gender, and sexual orientation. They also stress that the country has a more conservative culture and fans will be asked to respect local norms – which frowns on public displays of affection.